Improvements to Wilson Boulevard were identified in the Virginia Square Sector Plan, adopted by the County Board in 2002.

Project elements for all phases include:

Updates have been presented to the Lyon Village, Lyon Park, Ashton Heights and Clarendon Courthouse civic associations since 2011, and notification updates were provided throughout the design process.

Project updates will continue to be provided to residents and the business community.

This project is locally funded. 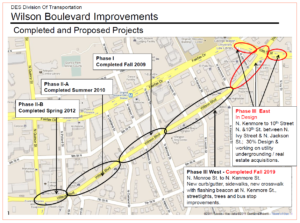