Background on the Reconfiguration Demonstration

2015 – Year 1 of the demonstration project was implemented in the spring of 2015 based on the recommendations made in the County’s 2004 Arterial Transportation Management Study. In May 2015, the section between North Frederick and North Manchester Streets was restriped from four to three lanes with the addition of bicycle lanes. The goals of the reconfiguration were to improve pedestrian, cyclist, and motorist safety, to better accommodate all road users along this section of Wilson Boulevard. Staff began monitoring the reconfiguration and collected data on traffic flow and safety into year two.

2016 – In Year Two of the demonstration project, County staff monitored the reconfiguration further to determine whether a complete streets project — currently unfunded — is viable along the entire section of Wilson Boulevard, west of North Glebe Road, and whether additional short-term improvements are needed. After completion of the first year, traffic counts and crash records were reviewed and a recommendation was made to continue the 3-lane section while looking for pedestrian crossing improvements and an extension for the section immediately west of North Manchester Street. Improvements to signage and markings for the transitions from 4 to 3 lanes at either end were also recommended.

Late in the year, meetings with nearby residents (through civic associations) were held to get feedback on a proposed plan for additional “short-term improvements” aimed at pedestrian crossings, extending the bicycle lane west, signage and markings, and side street vehicle traffic access to and from Wilson Blvd. 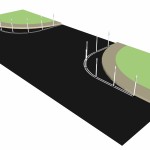 Sample of short-term improvement: marked curb with bulb out and bollards 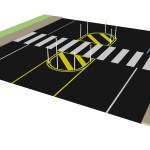 2017 – In Year Three, the County hosted a community open house on April 6 at Ashlawn Elementary School, sharing an update on the plan for short-term improvements that will be installed in the same year. Improvements largely consist of intersection enhancements for pedestrian safety, marking additional crosswalks with marked median/islands, and other short-term improvements (no significant hardscape work such as concrete medians, sidewalk expansion) identified by community members.

2018 – In Year Four, once funding has been secured, staff in the Transportation Planning Bureau, the Neighborhood Conservation Program, residents in the Bluemont Civic Association area, as well as other local community members, will work to finalize a scope of work for the long-term transportation planning study of the corridor.

Public Process for the Demonstration Project 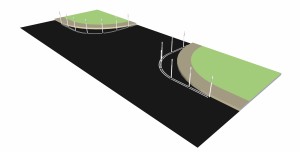