What to expect during construction:

At their Feb. 20, 2021, meeting, the County Board approved a contract to Sagres Construction Corporation for the construction of streetscape improvements and utility undergrounding along Washington Boulevard and 13th Street North.

Construction started in spring 2021 and is expected to last for 18-24 months. 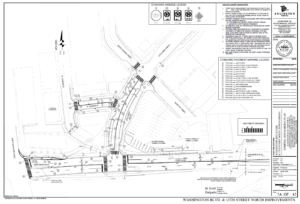 Washington Boulevard and 13th Street North is being redesigned to implement the Clarendon Sector Plan recommendations of providing two lanes of travel in each direction and eliminating the reversible lane signals.

The intersection is being redesigned so the Washington Boulevard lanes align on both sides of 13th Street North.  This will provide a more conventional “T” intersection.

Design analysis for this intersection was performed as part of the development of the Clarendon Sector Plan and, more recently, the Clarendon Multimodal Transportation Study.

The design for the Washington Boulevard and 13th Street North project is one element of the Clarendon West development that was approved by the County Board on Oct. 20, 2015. The Traffic Impact Study for that development provides background information and traffic analysis for intersections and streets within and outside the project boundaries. In 2018 the County requested the site developer update their previous traffic analysis to verify vehicle, pedestrian and bicycle volumes. The update was completed to reflect current development plans and parking ratios for the development area.

Project updates have been shared with the Clarendon Alliance and surrounding neighborhood community groups.