The next phase of improvements will be completed between 12th Street South and Army Navy Drive. The County is currently working with adjacent private developers to coordinate streetscape and bicycle facility improvements on this segment.

A new protected bike lane, sidewalk, streetscape, and lighting will be designed and constructed on the northbound side of South Eads Street in 2021. The southbound side will be constructed in conjunction with the development of the adjacent property.

In fall 2014, the County implemented a pilot project to convert South Eads Street into a complete street. The pilot project is located between 15th Street South and 23rd Street South and uses the existing curb-to-curb space to accommodate all modes of travel. The four-lane roadway was converted into three lanes: two through lanes and a center two-way left turn lane, with a new protected bike facility. Pedestrian crossings were upgraded and parking lanes reconfigured.

Since the completion of this pilot project, other bike facilities have been added to the remainder of the corridor between South Glebe Road and 12th Street South. 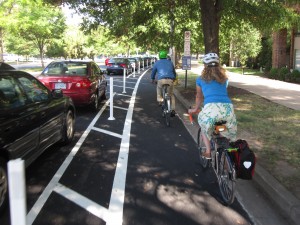