Background: Pay-As-You-Go and park bond funds were allocated for the reconstruction of the playground and field, the provision of accessible walkways, as well as associated grading and drainage improvements and landscaping. In addition, Neighborhood Conservation Program (NC) funding was approved for the reconstruction of two basketball courts and lighting of the courts in 2010.

Update
A lot is going on at Rocky Run Park. Phase I construction is complete, and some portions of Phase II construction are beginning.

Phase I Progress
Construction began in January 2013 at the lower end of the park and has been steadily moving upwards towards the North Barton Street end of the park. As of October 2013, construction is approximately 75 percent complete. The retaining walls and the majority of drainage, earthwork lighting and pavements have been installed. In the coming months as we push towards completion of the project, the field will be completed, playground areas and the picnic shelter will be constructed, and landscaping will be installed.

Phase II Labyrinth Construction Begins
The Phase II improvements at Rocky Run include the restroom replacement, accessibility improvements at the upper park area, and the installation of a labyrinth and healing garden in Barton Park. The labyrinth was formerly located at the Whitman-Walker Clinic and was donated to Arlington when the facility closed in 2009. In early October, a corps of volunteers in coordination with County staff began reconstructing the labyrinth in Barton Park just north of the community garden.

Other News at Rocky Run Park
The “skateable” art feature previously designed in Phase I design development and planned for installation with the Phase II construction activities has been removed from the project. During the final drawing development of the art feature, it was determined that the artistic expression and functionality of the sculpture could not be effectively realized. That area will instead feature a sculpted lawn and shade trees.

Schedule
Construction for the Phase I improvements began in late January 2013. The project remains on schedule with anticipated completion in early winter 2014.

The Phase II work will be completed in different phases and on different schedules: 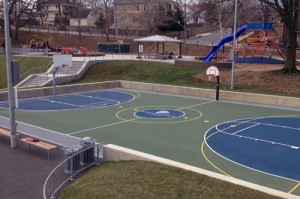 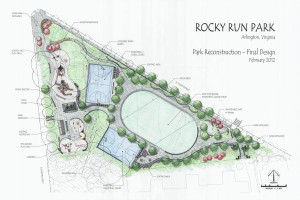 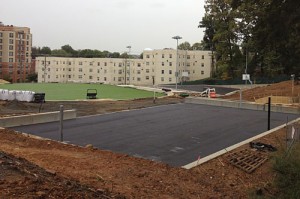