The Arlington Post Office was established in July 1936 to consolidate postal services within Arlington, including those that had previously been provided by the Rosslyn, South Washington, Glen Carlyn, Ballston and Georgetown offices. In 1935, street names were standardized within the County, unifying Arlington and paving the way for a centralized postal system. Selection of the Clarendon site for the post office was based on its proximity to the business district, and the prediction of future growth in the area. As the first federal building in the County, the post office provided a focal point for establishing the identity of Arlington and unifying the area’s disparate suburban villages into a single community.

The Arlington Post Office is an excellent example of modern interpretation of the Georgian revival style. The triangular site created by the acute angle of the intersection of North Hudson Street and Washington Boulevard is especially noteworthy, and the design for the building is an unusual one. It appears to be based on Tudor Place, William Thornton’s 1815 residence for the Peter family in Georgetown. It features a central domed portico flanked by tripartite windows inset within arches.  The Post Office was designed under the authority of Louis A. Simon, Supervising Architect of the Treasury.

The lobby murals are also noteworthy, depicting scenes of Virginia life. Seven panels depict Indians on Analostan Island, Captain John Smith and the Indians, tobacco picking at the Lee mansion, Robert E. Lee receiving his Confederate commission in Richmond, a picnic at Great Falls, polo players at Fort Myers and a 1930s-era harvest at an apple orchard. The murals were executed in 1939 by Auriel Bessemer, a muralist and art dealer based in Washington, DC. Bessemer was commissioned as a muralist for many post offices in the later 1930s and  early 1940s by the Federal Works Agency of the U.S. Government. 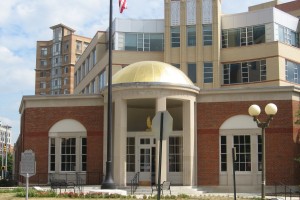 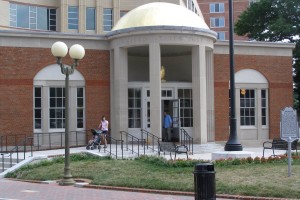 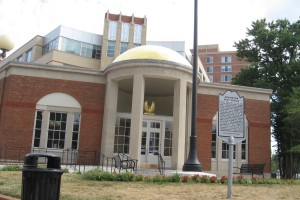