At the end of September, the Pershing Drive and Washington Boulevard project entered a new phase.

Crews have started ripping out old sidewalks and pavement and installing new concrete and curb and gutter. During the next few weeks, work will be concentrated on the southwest corner of the intersection (by European Food Import Export Inc.) though other corners will have some preparatory work done.

The contractor will minimize disruptions to pedestrian access to the sidewalk and will do their best to allow a path for people walking. However, there will be short durations when sidewalk closures will be necessary.

Be aware and cautious as you move through the intersection (as a driver or a pedestrian) since travel patterns may shift around as the work continues.

What to expect during construction:

The Washington Boulevard intersection was added to the Pershing Drive Complete Streets Project in 2018. The improvements, which include expanded sidewalks and updated curb ramps, are primarily geared toward improving accessibility and the pedestrian experience. View an image of the intersection design

On March 20, 2021, the County Board approved a contract with Ardent Company, LLC for streetscape improvements at the intersection of North Pershing Drive and Washington Boulevard. Construction is scheduled to begin in June 2021.

The County Board approved the contract to begin work on Phase I of this project at their Jan. 25, 2020, meeting. Phase 1 construction began in spring 2020 and was completed in spring 2021. This work included improvements at the following Pershing Drive intersections: North Fillmore Street, North Garfield Street, North Highland Street, and North Oakland Street.

This project seeks to improve safety and accessibility for all users throughout the Barton-Piedmont corridor, within the constraints of a narrow/limited right-of-way. It further seeks to consolidate bus stops to improve bus service efficiency and improve bus stops to better support riders and meet requirements of the Americans with Disabilities Act (ADA). These goals are consistent with the County’s Master Transportation Plan.

Pershing Drive is categorized as an urban minor arterial and serves thousands of automobile trips each day. Pershing Drive also supports bus service (ART & WMATA) and many bicyclists and pedestrians. The section of Pershing Drive between North Barton Street and North Piedmont Street has been identified to improve safety and access for all modes of transportation, especially for pedestrians.

Most bus stops on Pershing Drive are also not ADA-compliant. Some stops have been identified as being too closely spaced and failing to meet spacing guidelines recommended by the County’s Bus Stop Design Standards.

An analysis of existing conditions along North Pershing Drive began in summer 2015. In early 2016, Transportation staff developed preliminary concept plans for spot improvements along the corridor, referred to collectively as the Pershing Drive Complete Streets project. The concepts were shared with the Lyon Park and Ashton Heights Civic Associations, as well as the Pedestrian and Bicycle Advisory Committees.

The preliminary concepts presented in early 2016 recommended improvements at intersections that met one or more of the following criteria:

Staff received many comments on the preliminary concepts and reviewed them all. This chart summarizes some of the most frequently heard comments and notes staff’s action.

The revised scope of the project includes improvements to intersections and continues to implement the Bus Stops Consolidation Plan.

The conceptual design phase for Areas A to F of the corridor study area was completed in July 2017. View the Pershing Drive Complete Streets proposed improvements: 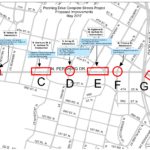 During the planning process, two concepts were generated for improving the section of North Pershing Drive between Washington Boulevard and North Barton Street. The first concept featured a planted median and the second featured protected bike lanes.

An open house was held on May 22, 2018, at the Lyon Park Community Center regarding the two design concepts for this section of Pershing Drive. Materials presented at the open house included:

The comment period for these options ended on June 6, 2018. The feedback submitted was considered by County staff to determine which concept to implement as a pilot installation. Overall feedback generally showed strong support for the protected bicycle lane, Option B. Where possible, staff revised the project design to mitigate concerns about on-street parking and to incorporate additional safety enhancements at the Washington Boulevard intersection.

A pilot, or test, installation of safety and accessibility improvements was implemented on Pershing Drive between Washington Boulevard and North Barton Street in October 2018. The pilot installation includes the addition of pedestrian/streetscape enhancements, protected bike lanes, and bus service efficiencies to improve safety for all roadway users. The pilot is expected to remain in place for several years.

* Note the following adjustments to the final design plan:

The project will be implemented in phases.

Phase I focuses on the following intersections with the greatest need for improvement due to crossing volumes and accident data:

Phase II/III will include the remaining intersections and will be designed and implemented upon funding availability:

Funding for Phase I of this project is provided by the Decal Fee Program, the Virginia Department of Transportation Revenue Sharing Program and the Northern Virginia Transportation Authority.

Additional funding for future phases will be sought through the County’s Capital Improvement Plan budgeting process.