Looking for information about a specific phase?

Bounded by Army Navy Drive between S. Fern and S. Eads Streets, next to the Marriott Residence Inn in Pentagon City.

This project was approved by the County Board on Sept. 21, 2013. Read the meeting minutes with approved site plan conditions (Item #58).

On Sept. 21, 2013, the County Board approved PenPlace, a mixed-use, phased development site plan that will bring nearly 2 million square feet of offices, ground-floor retail businesses, a hotel and the option of up to 300 residential units to the largest parcel of undeveloped land in Pentagon City.

PenPlace is north of the Metropolitan Park phased-development site plan, a 16-acre, mixed-use project that is in its fifth phase of construction. The PenPlace phased development, as proposed by Vornado/Charles E. Smith for the 10.2 acre site, would occur over many years with future development proposals going through the final site plan approval process and requiring public review and approval by the County Board.

The Board voted to adopt and amend the ordinance to the Pentagon City Phased Development Site Plan (PDSP) as follows:

The PenPlace Open Space Network Concept (“OSN Concept”) public planning process has been completed and the proposed OSN Concept  will be presented to the County Board in July as an addendum to the PenPlace Design Guidelines and will be titled the PenPlace Open Space Design Guidelines Addendum July 2014. A public planning process gathered input from community members and stakeholders to determine the preferred recreational use and design of three open spaces in the development: the 10th Street Plaza, Central Green and the 12th Street Plaza.

The proposed OSN Concept includes an open lawn; a prominent walkway that extends from the 12th Street Plaza through the inner Central Green and ends at the 10th Street Plaza; a café; water elements; sculptures; seasonal plantings and children’s play areas. The open spaces will provide a respite for pedestrians, workers and residents. The design and size of the spaces will accommodate community events and outdoor markets.

A modified OSN Concept was developed concurrently, which accommodates a setback requirement if a secure building is built in the B-West parcel.

Participants in the planning discussions were also asked to provide ideas for the community facility that will be located in either the A-East or the B-East building. Proposed uses include:

The development includes three connected open spaces within the block. To activate the site, a future community facility of up to 20,000 square feet is planned. The facility will be located on the ground floor and within steps from the Central Green open space. The existing superblocks between the two sites will be broken up with planned new streets and sidewalks, creating a lively, pedestrian-friendly environment. Two new east and west streets, 11th Street South and 10th Street South, and Elm Street, a new north and south street, will run through the Pen Place site. 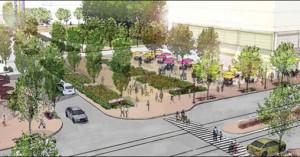