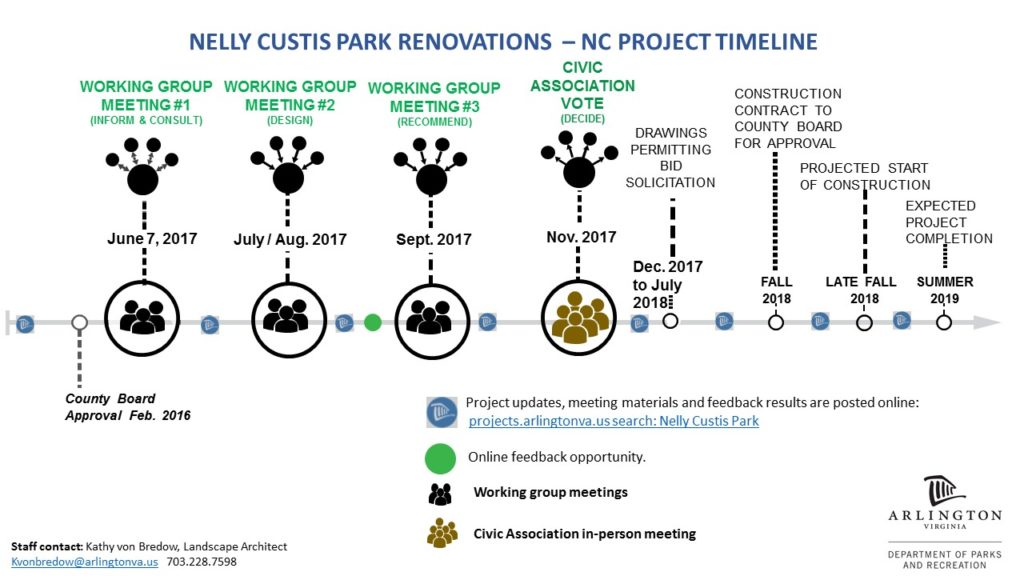 A County contractor is in the process of removing invasive plant species at Nelly Custis Park. Bamboo in the northwest portion of the park is being treated as follows:

Learn more about NC programs here. Every effort was made to not remove trees unless absolutely necessary. Invasive species will be removed in accordance with the County Invasive Plant Program.

At one time this park served as the playground to the former Nelly Custis School, which now serves as a Sheltered Occupational Center. According to the NC Plan for Aurora Highlands Civic Association (AHCA), the playground at Nelly Custis Park is used throughout the workweek by the Aurora Hills Play Group, children attending Calvary Children’s School, Keshet Child Development Center, the Potomac Crescent Waldorf School, and summer camp in conjunction with the AH Cooperative Play Group. The park is also heavily used by neighborhood children and dog walkers.

Community members’ concerns have included lack of shade in the playground portion of the park; lack of drinking fountains or bathrooms; and a need for additional trash receptacles. View an inventory of nearby Parks Here

November 8, 2017:  The Aurora Highlands Civic Association (AHCA) voted to approved the proposed redesign of Nelly Custis Park at their November 8  AHCA meeting.  The AHCA Neighborhood Conservation Representative and County staff made a presentation for the proposed redesign of the park which includes a play area on the east side of the park, a central grassy open area and a contemplative gathering area on the west side of the park. The presentation is available for viewing below, along with supporting documents. The project then enters the construction document development phase.

April-October 2017:  A Design Working Group consisting of eight neighborhood volunteers was formed to work with staff and develop a proposed redesign of Nelly Custis Park for AHCA review and approval.

January 11, 2017: At the January AHCA meeting DPR and CPHD/NC staff introduced the project manager for the design development phase and shared next steps in the Nelly Custis Park Project.  See the staff presentation here

November 21, 2016: Contractor will be applying foliar herbicide spray to bamboo regrowth as part of the ongoing invasive removal process. This is the fall treatment, finishing up  the first year of treatment.

June/July 2015: An Open Arlington Forum gathered community input that was part of the ongoing development of goals and deliverable for the Nelly Custis Park project. Public feedback and comments can be viewed by visiting the Open Arlington link here. The comments revealed a lot of interest to increase the amount of shade, build a dog park, ban dogs from the park, add additional play equipment and preserve green space. While dogs on leash will continue to be welcome at Nelly Custis Park, staff have concluded that a dog park is not viable given the size of the park. Tree preservation is of paramount importance.