As of Sept. 1, 2020, the Metropolitan Washington Airports Authority (MWAA) has moved their staging lot for transportation network companies (TNCs, which include Uber and Lyft) from South Eads Street back onto the National Airport campus, where it will remain as the airport continues its transportation improvement program.

With the removal of the TNC staging function, the County plans to take down the temporary traffic signal installed at the corner of Route 1 and 27th Street South.

In April 2018 the Metropolitan Washington Airports Authority (MWAA) began operating a staging lot for transportation network companies on South Eads Street. MWAA relocated the lot to the Eads Street site to make room for their Project Journey construction project, but the move resulted in increased traffic congestion in this area.

County Transportation staff developed interim solutions for mitigating the traffic situation by shifting some of the TNC lot’s access from South Eads Street to Route 1. This solution required approvals from the Virginia Department of Transportation (VDOT) which is responsible for the operation of Route 1. In addition to these interim solutions, the County worked with MWAA to identify additional mitigation strategies.

Phase 1 – Open the TNC lot’s driveway to Route 1, to shift most of the lot’s outbound traffic from South Eads Street to the Route 1 ramp to the airport

In May 2019 the County installed “No U-Turn” signs on southbound South Eads Street at Fort Scott Drive, adjacent to the MWAA TNC lot. The new signage is intended to help reduce congestion and address safety concerns near the lot entrances.

This phase would have aligned the lot’s Route 1 driveway with the Route 1/27th Street intersection to allow the traffic signal to operate a concurrent signal phase, allowing traffic from the lot and 27th Street to turn at the same time. Implementation would require relocating a traffic signal pole, replacing Phase 1’s temporary traffic signal with a permanent traffic signal pole on Route 1, and reconfiguring the TNC lot to allow proper ingress flow.

March 2019 update: The County studied the feasibility of modifying the Route 1 intersection configuration and, as a result, does not recommend implementation due to significant construction impacts to traffic, and the expected cost ($250,000) outweighing its limited benefits.

County officials held a meeting on March 18, 2019, to update the community on efforts to mitigate traffic congestion at MWAA's TNC lot and to discuss the results of changes to date. The meeting included representatives from MWAA, Uber and Lyft.

On April 2, 2019, the Aurora Highlands Civic Association and the Crystal City Civic Association submitted a letter to County officials offering ideas to improve traffic congestion within the neighborhood resulting from the lot.

The County also collected feedback via an online form that ended on April 19, 2019:

On Sept. 27, 2018, the County held a public meeting at the Aurora Hills Community Center to discuss proposals for mitigating the traffic situation. MWAA, VDOT and Arlington Police representatives also attended. 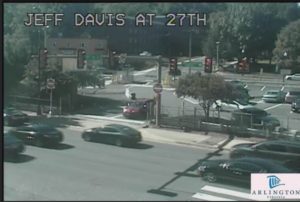