The project will occur in two stages. The first stage is the “tactical” pilot closure of the slip lane, which occurred in July 2019. The County used lost-cost, temporary materials to close the slip lane from traffic.

The blocked off space will be reallocated as park space, furnished with tables, chairs, and local art work. The County encourages members of the community to use this new open space for daily activity.

The second stage of the project will be the design and build-out of an expanded Dark Star Park. This will extend the greenspace and sidewalks into the unutilized street space. This stage is currently at a 15% level of design.

Concept planning for the design and build-out of an expanded Dark Star Park was initiated under the Core of Rosslyn Transportation Study.

The project also sets the stage for a two-way Fort Myer Drive, another project identified through the Core of Rosslyn Transportation Study. The two-waying of Fort Myer Drive will occur once the slip lane closes, the Fort Myer Drive tunnel is filled in, and interchange modifications occur with the US-50 and Meade Street ramps.

This project resulted from the Core of Rosslyn Transportation Study, which included a 1.5-year public engagement effort.

As the project moves forward in the design process, we will present the plans to the community for additional input.

Stage one of this project is made possible through County operating funds and a partnership with the Rosslyn Business Improvement District.

The design portion of stage two is funded through the County’s Capital Improvement Plan (CIP). Funding for stage two construction is expected to be determined in 2020 during the County’s next CIP update. 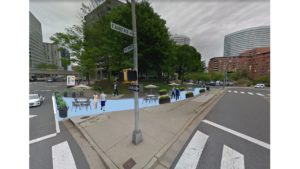 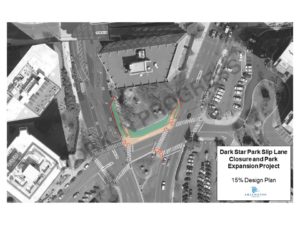