The Dan Kain Building in Clarendon, originally known as Sheff Store, was constructed in 1945-1946 for property owner and real estate developer, Frank Lyon. It assumed the name of Dan Kain due to its long-time occupant, Dan Kain Trophies, which operated from 1961 to 2004.

The Dan Kain building has two stories and is located on a 4,551-square-foot parcel.

It is an excellent example of the Streamline Moderne architectural style applied to a functional commercial building. It is also significant because it was the design prototype for the Olmsted Building, which was designed to be architecturally compatible with the historic structures in Clarendon. The major features of the Streamline Moderne style found in the Dan Kain Building are also incorporated in the Olmsted’s Post-Modern style. Its most notable feature is the cylindrical corner above the recessed entry protruding beyond the flat roof. The entrance is flanked by limestone pilasters, which anchor the building visually to the intersection of North Highland Street and North Washington Boulevard. Plate-glass display windows separated by flush columns of limestone are each bordered in aluminum and capped by a molded aluminum band. The entire façade is framed by a concrete string course; a molded concrete cornice outlines the roof. A three-paneled, glass-block bay highlights the two-story wing that abuts the east elevations. The flat roof is underscored by a molded concrete cornice.

The building was designed by Architect Donald H. Drayer. Drayer, who worked previously in the Office of the Architect of the Public Buildings Administration, emerged after World War II as an important commercial architect in the capital area who designed motels, offices, shopping centers, and apartments. \ 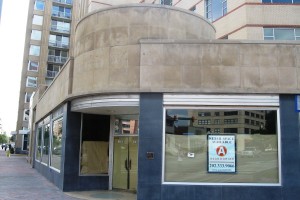 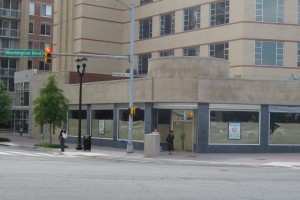