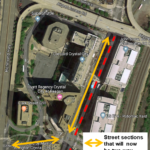 This section of Crystal Drive now has one travel lane in each direction. 27th Street has two eastbound lanes to access Crystal Drive and Potomac Avenue, and one westbound lane providing direct access to the Hyatt and Route 1.

The construction contract for the final phase of the Crystal Drive two-way conversion was approved by the County Board in September 2018.

Construction started in February 2019 and was completed in September 2019.

The intent of the project is to improve the navigability of Crystal City and improve safety for all modes of transportation. In addition to the street work, the project includes the installation of:

Prior phases (completed in summer 2013)