The County Board approved rules for the new bus-only lanes in January 2016.

Arlington’s section of the Transitway opened on April 17, 2016:

Transitway stats from its first year of operation.

The Transitway will support redevelopment already underway in these neighborhoods, as well as planned development in Potomac Yard.

Alexandria’s Transitway section opened in August 2014, which allowed the first phase of Metroway service to begin.

The Arlington County Department of Environmental Services has worked side-by-side with the community on this project and with our project partners, including the City of Alexandria, Washington Metropolitan Area Transit Authority and the Virginia Department of Rail and Public Transportation.

The following are part of the Transitway project's federal environmental review. To request documents not listed here, contact Blanche Buergler at 703-228-0597

Residents, business owners, building managers and transit riders were heavily involved in the project’s environmental analysis and the design and locations of the Transitway stations. Public meetings during planning and design included: 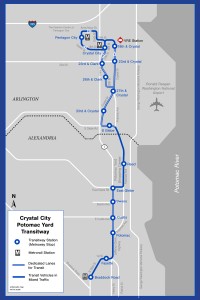