The Washington Metropolitan Area Transit Authority (WMATA) and Arlington County completed the development and analysis of alternative site locations for the new east entrance for the Crystal City Metrorail station. WMATA, the County, and the adjacent private land owner agreed on the specific location to build the east entrance -- the northwest corner of Crystal Drive and 18th Street South.

The project is now in the concept design phase. WMATA is finalizing the concept design plan for the east entrance in coordination with the County and private land owner. The three parties will coordinate the next steps, which will include an implementation plan, preliminary engineering, and final design.

The Crystal City Metrorail Station is one of the more highly used stations in Arlington County. The existing entrance is reaching capacity during peak periods and has limited emergency egress. The existing street-level elevator access is slow, inconveniently located and lacks redundancy.

With redevelopment underway in Crystal City, overall trip-making will increase and transit will need to capture a substantial majority of that increase, which will overburden the existing station entrance. In addition, large volumes of passengers transfer between Metrorail and Virginia Railway Express (VRE), but the transfer route is long, circuitous and has accessibility barriers.

Plan for a second entrance

The access improvement plan for the Crystal City Metrorail station includes a new entrance near Crystal Drive, at the east end of the station, to provide easier access from Crystal Drive, the VRE station and the new Transitway station at Crystal Drive and 18th Street South. In addition, the access improvement plan includes elevator upgrades to improve compliance with the Americans with Disabilities Act (ADA) and provide more conveniently located elevator access.

The new east entrance will include elevators, escalators and/or stairs, a fare payment area with fare vending machines, a kiosk, and an underground passageway to the existing train platform and/or mezzanine. The new entrance will provide additional egress during emergency situations.

WMATA will own and operate the new east entrance as part of the Metrorail system.

WMATA evaluated the alternative locations, conducted additional engineering analysis, and obtained input from the County and adjacent property owners to finalize the location of the second entrance.

In addition to the TDP and CIP process, County staff presented the planned east location and project scope to the community at an open house on March 21, 2018. Staff presented the project to the Transit Advisory Committee in July 2018.

In October 2018, the County Board approved a plan to redevelop a portion of Crystal Square in Crystal City. The project includes a new retail building at the northwest corner of Crystal Drive and 18th Street South. The new second entrance for the Crystal City Metrorail station will be integrated into the retail building. The redevelopment underwent a one-year public review process that included Site Plan Review Committee meetings, Long Range Planning Committee meetings, public hearings before the Transportation and Planning commissions, and an online survey. Learn more at Crystal City block Plan G – Metro Market Square. 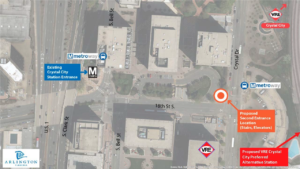 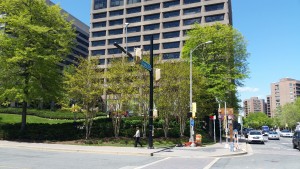