After two years of thorough analysis and public engagement, County staff finalized the study’s Preferred Alternative. This alternative lays out a set of projects to be built by 2030 that will move Rosslyn closer to the transportation vision outlined in the Sector Plan.

The study's final report describes the project process, the alternatives considered, and a prioritized implementation plan for proposed projects.

County staff will continue to engage with the community on each project in the Preferred Alternative as they move forward. Each new project will have its own webpage for community reference. Continue to check this study page for updates.

The first project to be implemented is the Dark Star Slip Lane Closure and Park Expansion Project.

This study examined the feasibility and potential impacts of permanent changes to the street network in the core of Rosslyn, with the goals of improving safety and accessibility for all users – those walking, biking, using transit and driving.

The Preferred Alternative includes the following major projects, which stem directly from the Rosslyn Sector Plan, to be constructed during the next 10 years:

Concurrent with the transportation study, we are considering short-term, lower-cost opportunities to improve the overall street and sidewalk experience in Rosslyn. The effort began with a community workshop on March 4, 2017, where we introduced the concept of Tactical Urbanism – the use of short-term strategies to test long-term transportation solutions and capitalize on place-making opportunities.

Examples of short-term enhancements include installing temporary curb extensions to shorten the distance one has to walk when crossing a street, and converting some underutilized street space for pedestrian use.

View photos of street enhancements in our Flickr album.

View a timeline of study milestones and the process for community feedback (click the image to see a larger version): 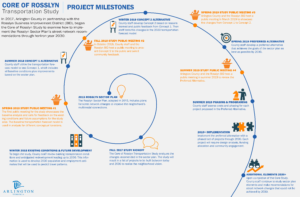 At the fourth public meeting we presented the Preferred Alternative, which further refined Concept 2, and proposed implementation phasing.

At the third public meeting we presented Concept 2, which incorporates public feedback and lessons learned from the first concept, includes most changes listed in the Sector Plan, but keeps Lynn Street and Moore Street as one-way.

The study's second public meeting shared the results of Concept 1, which uses street network recommendations from the 2015 Rosslyn Sector Plan and analyzes how Rosslyn streets would perform if the recommendations are implemented.

The first public meeting for the study presented the baseline analysis of existing transportation conditions in the Rosslyn core study area.

At this open house in September 2017, staff from the County and the Rosslyn BID provided details on recent street enhancements and how they will inform the transportation study examining permanent changes to the street network in the core of Rosslyn.

The Rosslyn BID and Arlington County hosted a community workshop in March 2017 to envision how vehicles, buses, bikes, and pedestrians can better use streets in the core of Rosslyn.

Participants, representing residents, local businesses, developers, visitors, commuters and transportation officials, examined some of Rosslyn’s busiest intersections and worked together to come up with pilot strategies to make them flow better.

The County’s Transportation Division created a Stakeholder Advisory Group and Strategy Group to aid in identifying and developing improvements to the street network in the core of Rosslyn.

Advisory group members, which include residents, business representatives, and the Rosslyn BID, attended meetings at key milestones throughout the transportation study process, and shared information about these efforts with their respective community networks.