Sidewalk closures will be needed for this work, affecting either the north or south side of Columbia Pike between South Frederick Street and South Dinwiddie/Columbus Street. The closures are tentatively scheduled for Monday, Oct. 26 through Monday, Nov. 2.

Bus stop relocations – See a list of temporary bus stops during this work.

On July 16, 2019, the County Board approved a $1.6 million contract with Sagres Construction Corporation to build the first 4 of 23 transit stations planned for Columbia Pike.

The first four stations will be located at:

Columbia Pike improvements are moving forward in phases. As work begins on each section of the Pike, the first step is to underground utilities, followed by improvements to the streetscape, and then installation of new transit stations.

New transit stations along Columbia Pike will serve two purposes: accommodate riders on the busiest bus transit corridor in Virginia, and serve the community’s vision of transforming the Pike into a more transit-oriented, pedestrian-friendly “Main Street.” New stations will make transit along the Pike easier, safer, more attractive and accessible – encouraging more people to use it.

Transit stations are designed to shelter more passengers than a typical bus stop and will be fully accessible. Each station platform will be 90 to 120 feet long to accommodate two transit vehicles. The stations will include:

Learn about project changes and improvements since the prototype station at Walter Reed Drive opened.

The transit stations are a major feature of the County’s planned premium transit network connecting Columbia Pike, Pentagon City and Crystal City. The network will offer service that is fast, frequent, reliable and easy to use, with simplified bus routes, increased weekday and weekend service, and a new “one-seat ride” from Skyline to Pentagon City-Crystal City.

The first phase of service was implemented in June 2018 with a Metrobus 16 Line restructuring that streamlined 11 route patterns into five, while providing a net increase in service. Future phases will include a new Metrobus 16M (replacing the 16G/H/K) which will offer high-frequency service connecting Skyline, Columbia Pike, Pentagon City and Crystal City.

As part of the Columbia Pike premium transit network, the County plans to allow prepaid fare payment at the transit stations, which will allow for faster bus boarding. Arlington is working with the Washington Metropolitan Area Transit Authority and other Northern Virginia jurisdictions on a uniform approach for this technology to allow seamless movement between transit systems.

Arlington Public Art is a partner on this project and is funding the fabrication and installation of a film that will be applied to the patterned glass roofs of the first four transit stations. Per the Public Art Program, Guidelines for County-Initiated Projects, Public Art staff will convene an Art Advisory Panel for the selection of an artist and the design of the film. Learn more on the Public Art website

View the open house display boards - in English or Spanish

An open house was held on April 28, 2015, for members of the community to review the 50 percent design and provide input on the importance of various station amenities and the proposed placement of station features.

The transit stations program is funded primarily by federal and state funds and local commercial real estate tax revenues that can only be used for new transportation projects.

The estimated cost for each station is comparable to stations for the Crystal City Potomac Yard Transitway and other light rail, streetcar and bus rapid transit systems across the nation. 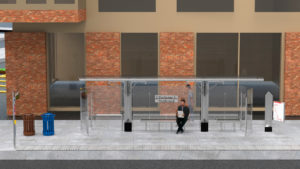 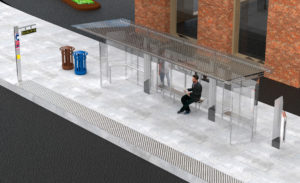 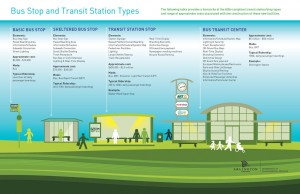