In December 2019, construction started on the first four transit stations along Columbia Pike -- Visit the project page for details

The first phase of Columbia Pike Premium Transit service was implemented in June 2018. This included a restructuring of the Metrobus 16 Line route (11 route patterns streamlined to 5, with a net increase in service), Metrobus schedule improvements, and introduction of an updated logo for “Pike Ride.”

In Fiscal Year 2022, the second phase of Premium Transit service is planned to be implemented. This will include the Metrobus 16M, which will replace the 16G/H/K and provide high-frequency service connecting Skyline, Columbia Pike, Pentagon City and Crystal City.

A major feature of the County’s 10-year plan for transit improvements is creation of a Premium Transit Network connecting Columbia Pike, Pentagon City and Crystal City. The premium network will offer bus service that is fast, frequent, reliable and easy to use, with features including simplified routes, increased weekday and weekend service, and a new one-seat bus ride from Skyline to Pentagon City-Crystal City.

The Premium Transit Network will feature three different types of service to meet the needs of different riders in the Columbia Pike and Crystal City-Pentagon City corridors:

All of the transit service along the Premium Transit Network will benefit from passenger amenities aimed at creating a system that is fast, frequent and easy to understand. These amenities will be phased in and include: 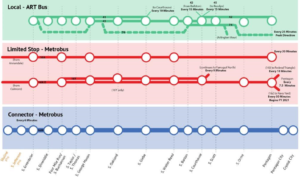