Current Use of Property: Residential

Constructed in 1943, Cambridge Courts consists of twenty, two to three-story apartment buildings with a total of 159 condominium units. The Colonial (Georgian) Revival-styled garden apartment complex is a contributing resource to the Lyon Park National Register Historic District. The property abuts the north side of Arlington Boulevard (US Route 50) at its intersection with North Fillmore Street. The garden apartment complex is comprised of twenty multiple-family buildings that feature similar architectural elements, but are slightly different in design and layout. The two to three-story buildings are primarily arranged in a modified U-shaped configuration in a park-like setting, thus conforming to the typical garden apartment form and layout common in Arlington County and throughout the United States in the mid-twentieth century. Between 1984 and 1986, Cambridge Courts was converted to condominium units in four phases. There is currently a total of 159 condominium units.

The Colonial (Georgian) Revival-styled brick buildings have simple rectangular massing, windows and doors in strict symmetry, multi-light double-hung vinyl-sash windows (replaced at an unknown date), and centrally-located front doors with decorative surrounds. The roof forms consist of asphalt-shingle side-gabled and hipped roofs. All of these aspects are characteristic of the strict formality of the Colonial (Georgian) Revival architectural style.

Cambridge Courts, built in 1943 and originally named Leehigh Apartments, exemplifies the community planning and development of large-scale rental housing for Federal employees during World War II due to Arlington County’s burgeoning population growth. The Federal Housing Administration (FHA) insured the construction of the apartment complex and rationed construction materials were allocated to the project due to its location within a Defense War Housing Critical Area and proximity to the Pentagon and Fort Myer. Cambridge Courts is further significant as its overall architectural design and layout reflect the FHA standards adopted for the benefit of modern, attractively planned residential communities for people of moderate means. The complex is an excellent example of garden apartment design with its use of traditional Colonial (Georgian) Revival architecture, concrete block construction veneered in brick, shallow pitched gable and hipped roofs, main entrances with public corridors, and double-hung windows that unite the interior spaces with the landscaped courtyards. Ample green space, trees, shrubbery, and an internal network of walkways distinguish the natural park-like setting of the property.

Cambridge Courts is one of only ten wartime rental housing complexes constructed in Arlington County. Even with documented rationing of materials for the war effort, Corning & Moore’s design for Cambridge Courts had exceptional architectural depth. The architects capitalized on the small-scale development parcel and introduced a sense of architectural hierarchy and formality in their design. The design of Cambridge Courts more closely interprets the stylistic elements of the Georgian period (symmetry of the fenestration, projecting pedimented entryways, paired gable-end chimney, etc.) in comparison to the more eclectic Colonial Revival-styled gardens apartment complexes most typical in the County. 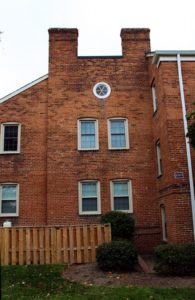 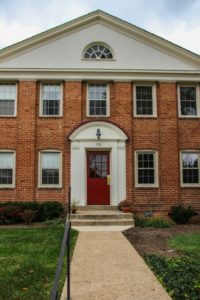 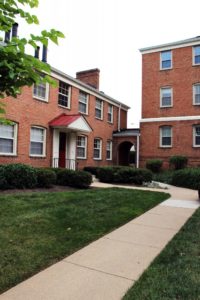