Current Use of Property: Residential and commercial

Composed of six residential sections surrounding a commercial core, Buckingham was designed and constructed in six phases between 1937 and 1953. The first phase of the multi-family apartment complex was designed in the Colonial Revival style by Henry Wright with the assistance of Albert Lueders and Allan Kamstra. It was constructed by Paramount Communities, Inc. between 1937 and 1938. Lueders and Kamstra executed the subsequent phases of development, also in the Colonial Revival style, following Wright’s inspiration for community planning. Intended to be a middle-income neighborhood, the complex was financed by the Federal Housing Administration (FHA), with insured mortgages for each of the building phases. The tremendous popularity of the first phase of development at Buckingham, coupled with the great need for quality, affordable housing in Arlington County, prompted Paramount Communities, Inc. to increase the rate of production so more units would be available during the first year. The garden-apartment complex is a significant example of the application of pioneering principles of garden city planning to a large-scale, planned residential community. These principles include low-density superblocks, curving streets, separation of automobiles and pedestrians, shallow building plans allowing improved light and ventilation, and landscaped common spaces designed around the apartments to form a continuous park. Buckingham played a significant role in the development of affordable, well-planned garden communities in Arlington County, and its success and acceptance subsequently affected housing policy in the United States. The developer, Allie Freed, chairman of the Committee for Economic Recovery, sought to promote economic recovery through the construction of large-scale privately financed housing developments, and attempted reform of the building industry by employing production techniques of the automobile industry including pioneer uses of prefabrication. The location of the Buckingham Apartment Complex near the Nation’s Capital provided the development with the exposure and political awareness necessary to influence housing developments nationwide.

Although constructed in six phases between 1937 and 1953, Buckingham is a cohesive Colonial Revival-style, multi-family neighborhood within a park-like setting with landscaped yards and a commercial center. Despite being sold by the Freed family and now owned independently in sections, Buckingham continues to maintain this planned garden-style neighborhood setting. Buckingham today is comprised of Buckingham Village 3, Arlington Oaks (condominiums), Ballston Park at Historic Buckingham Village, and the Gates of Ballston. Demolition has occurred resulting in the loss of 30 buildings since 1953. This includes a single building in Phase 1, all four buildings in Phase 2, and 22 buildings in Phase 6. Despite the loss of these buildings, all of which are located along the edges of the garden-apartment complex, Buckingham remains significant today as an intact example of a planned residential community.

n 1998, Ballston Park at Buckingham Village was placed in the National Register of Historic Places. This section of Buckingham was the first of the six phases developed, dating from between 1937 and 1938. The original historic district included 54 resources, two of which were non-contributing and one that has since been razed. In 2003, the historic district was expanded to include includes 136 buildings. The expanded boundaries include 83 buildings, all of which are contributing. Thus, of the 136 buildings in the Buckingham Historic District, there are 134 contributing resources and two non-contributing resources. Sixteen buildings in Buckingham Village 3 are not included in the Virginia or National Register listings, though eligible and to be nominated for National Register designation in 2009.

The Buckingham Historic District was listed in the Virginia Landmarks Register and the National Register of Historic Places under Criterion A in the area of community planning and development as an example of a planned garden-apartment complex that became a model for other planned residential developments marketed to members of the middle class. Further, Buckingham was listed under Criterion C in the area of architecture as a unique garden-apartment complex design by noted architects Henry Wright, Albert Lueders, and Allan Kamstra. The architectural achievement of Buckingham combines the best in garden-apartment planning with FHA-insured financing guidelines to make this property an excellent example of the garden-apartment complex as described in the Multiple Property Documentation Nomination, Garden Apartments, Apartment Houses and Apartment Complexes in Arlington County, Virginia: 1934-1954.

Glebe Road is the main road running north to south through the complex. The decision to locate the complex near the Nation’s Capital made it nearly impossible to acquire a tract of land without some road systems already in place. Planners of garden communities strongly urged the direction of traffic around the community; however, Glebe Road, one of the oldest in Arlington County, was an unavoidable site constraint. The designers addressed this site feature by incorporating Glebe Road into the design with landscaping and locating the shopping facilities at its intersection with North Pershing Drive. The other major north-south road is George Mason Drive, which has a wide landscaped median, giving it the effect of a boulevard. From north to south, the major east-west streets are Henderson Road, North Fourth Street, Pershing Drive, and North Second Street. Angled curves slow local traffic on the secondary streets.

The apartment buildings of Buckingham are designed in the Colonial Revival style. The buildings are two stories in height, constructed of common bond brick with slate hip and gable roofs. A few of the roofs have been reclad with asphalt shingles. Brick quoins mark the corners of many of the buildings. The entryways provide a decorative focus; eleven different types of cast stone surrounds, including broken pediments, segmental arches, and stylized jack arches, mark the entrances. The sills, lintels, and belt courses are also cast stone. The basic building unit consists of an eight-bay structure with two stairwells, each leading to four apartments. Other combinations of building units provide variety and accommodate the different apartment sizes. Some have three stairwells, with a center reverse gable or gable-roofed center block flanked by two wings. The varying roof treatments on the larger structures help to maintain their residential scale.

At the angled corner of North Fourth and North Piedmont Streets stands the one apartment house that breaks the pattern. Built in 1937, as an experimental “feeler” of public reaction to non-traditional design of the era, the three-story building has a flat roof deck and cantilevered balconies. Although popular, this design, reminiscent of German apartment buildings of the 1920s, was not repeated throughout the community. The brick and cast stone entry surrounds and placement parallel to the street unify this building with others in the complex.

The floor plans are successful in providing maximum light and air for each apartment unit, while taking full-advantage of the pleasant views provided by the park-like setting. The buildings are sited around U-shaped courtyards, or angled along the secondary streets with landscaped gardens laid out by H.E. Van Gelder. The gardens provide a verdant setting, while the small-scale Colonial Revival buildings conjure up images of life in a rural village. An interior system of paths links the buildings throughout the interior of the superblocks. Many of the buildings are arranged around courtyards facing the street; balustraded walls mark these formal courtyards, which contrast with the irregularly shaped informal spaces of the interior of the blocks. As farmland in the 1930s, Buckingham’s site had no formal landscaping. Extensive plantings of oaks and elms have created a neighborhood filled with tree-lined streets and shaded interior courtyards. Many of these buildings have extensive foundation plantings. 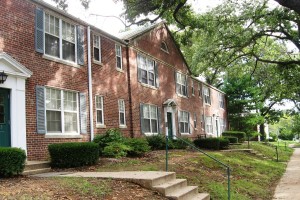 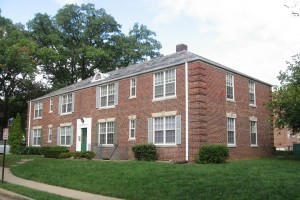 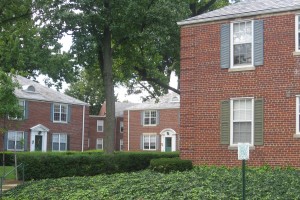 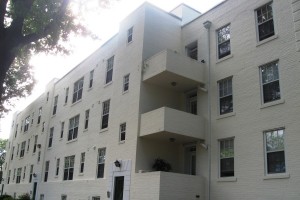 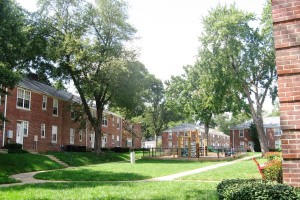