Current Use of Property: Private residence

Robert Stinson Lacey, a decorated Civil War veteran and Arlington County civic leader, constructed Broadview in 1881. Lacey operated a large market farm at and around Broadview. He actively participated, supported and represented Arlington citizens in a number of local and state issues, including bridge construction to Washington, D.C.

The property originally spanned about 200 acres. Today, the Broadview farmhouse, on a 1/3-acre parcel in the Waycroft-Woodlawn neighborhood, remains one of the best remaining examples of residential Queen Anne-styled architecture from the late-nineteenth century in Arlington County.

While the original building consisted of a modest I-house form, the farmhouse underwent a major expansion in the late 19th century to accommodate the arrival of Lacey’s widowed niece, Sallie Lacey Johnson, and her three children. There have been limited alterations to the exterior of the building in the last century.

After Lacey’s death in 1915, Broadview was home to a series of renters until John and Georgia Gerstein purchased the property in 1977 and renovated the historic house. The Gersteins sold Broadview to its current owners, Alex Deucher and Angela Guzman, who requested the local historic district designation.

The Lacey family utilized elements of the Queen Anne style in their 1890s expansion, including the prominent front-gable, three-story tower with a mansard roof and decorative bracketed cornice, stamped metal roof, bay window and wrap-around porch.  While later owners replaced the simple wood porch columns/posts with delicate turned posts and spindle work details, the changes adhere to the overall style of the dwelling. 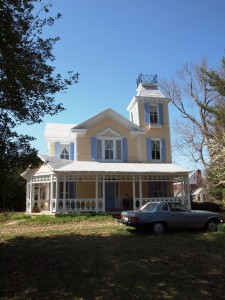 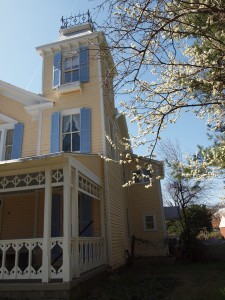 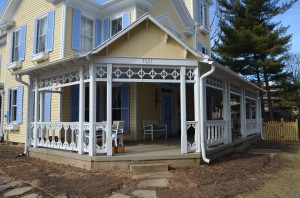