The Virginia Department of Transportation (VDOT) held a virtual design public hearing on Thursday, Nov. 5, 2020, for the Boundary Channel Drive Interchange Project. A recording of the meeting is available on VDOT’s webpage.

The Virginia Department of Transportation (VDOT) is administering the project under a design-build delivery. Visit VDOT's website for current project status and information.

The project's environmental review process concluded in October 2019 with the Federal Highway Administration’s approval of the Interchange Modification Report and issuance of a Categorical Exclusion. Preliminary design began in February 2020.

Based on the feedback received at our June 2015 public meeting, and feedback received from VDOT and Pentagon staff, Arlington County leadership and FHWA staff selected the accepted concept which was analyzed in the approved Interchange Modification Report. The accepted concept provides the best balance of traffic operations and safety for all modes, while minimizing impacts to the Pentagon and future improvements to Long Bridge Drive and the future expansion of Long Bridge Park. The accepted design concept includes converting the existing full cloverleaf interchange design to a partial cloverleaf configuration for the southbound I-395 ramps; the existing ramps in the southwest quadrant will be removed and all movements to / from southbound I-395 will be consolidated on the existing ramps in the northwest quadrant. In doing so, the two existing weaving segments along southbound I-395 in the vicinity of Boundary Channel Drive will be eliminated.

County staff and partnering agencies shared and sought feedback on the accepted concept.

County staff and partnering agencies sought feedback on the elements that made up the original three design concepts to improve the interchange.

The project is fully funded via a combination of local and state revenue sharing sources, regional funds from the Northern Virginia Transportation Authority, and local bonds. 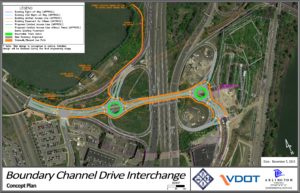