The project began working through a detailed traffic operations analysis in summer 2015. This study evaluated the multimodal travel impact of the proposed improvements on the surrounding future 2020 and 2040 Pentagon City and Crystal City street network. The traffic analysis was approved by the Virginia Department of Transportation (VDOT) in December 2017.

Based on the recommendations and results in the final traffic analysis report, the project's working concept plan was updated to enhance the multimodal access and mobility of the Army Navy Drive project corridor. The concept plan will be finalized at the 30 percent design stage after it has been shared with the community and stakeholder groups and their feedback has been incorporated into the design.

The project will re-build Army Navy Drive within the existing right-of-way as a multimodal complete street featuring enhanced bicycle, transit, environmental and pedestrian facilities. The goal of the project is to improve the local connections between the Pentagon and the commercial, residential and retail services in Pentagon City and Crystal City.

The reconstruction will provide a physically separated two-way protected bicycle lane facility along the south side of Army Navy Drive, in addition to shorter and safer pedestrian crossings, and will accommodate future dedicated transit lanes. Motor vehicle travel lanes will be reduced in number where appropriate and will be narrowed to dimensions appropriate for a slower urban context.

The existing raised medians will be removed and re-built as a planted median. The traffic signal equipment at the five project corridor signalized intersections will be replaced with all new equipment. The new street design will incorporate best practices of environmental sustainability, including green landscaping treatments to reduce stormwater runoff and recharge groundwater.

A public design workshop was held on Jan. 31, 2018, at the Aurora Hills Branch Library. A comment period was open from the time of the meeting through Feb. 16, 2018.

Staff introduced the project to the Arlington County Bicycle Advisory Committee in December 2017 and the Crystal City Business Improvement District in January 2018 to solicit feedback on the design.

In June 2019, staff presented the 30 percent design plan to the Bicycle Advisory Committee - Read the presentation 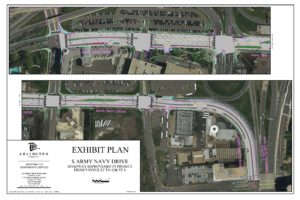