As of Friday, Aug. 7, 2020, parking will no longer be allowed on South Southgate Road between South Oak Street and Columbia Pike.

The road is now owned by the United States Government, after a suit was filed to take possession of the land from Arlington County through eminent domain.

The United States Government plans to use the Southgate Road right-of-way as part of the Arlington National Cemetery’s Southern Expansion. Construction is anticipated to start in spring 2021.

In and around the former Navy Annex site, bounded by Columbia Pike, South Joyce Street and Southgate Road and with Arlington National Cemetery directly to the north.

In September 2019, the Army Corps of Engineers released the Draft Finding of No Significant Impact for the Southern Expansion and Associated Roadway Realignment Final Environmental Assessment. The Final Environmental Assessment evaluated potential impacts resulting from the proposed increase of the cemetery's contiguous acreage and roadway realignment by utilizing the adjacent, former Navy Annex site located just south of the existing cemetery in Arlington, Virginia. It also described the potential historical effects of integrating the Air Force Memorial with the cemetery as part of the expansion.

The Federal Highway Administration (FHWA) Eastern Federal Lands Highway Division is designing the roadways that would be relocated as a result of Cemetery expansion. This project will realign Columbia Pike, modify the South Joyce Street intersection and the Columbia Pike/Washington Boulevard (Route 27) interchange, and replace Southgate Road with a new segment of South Nash Street.

The U.S. Army informed Arlington County in June 2017 that it will no longer pursue a land exchange with the County. The Army has said it will use the entire former Navy Annex site, along Columbia Pike, to expand Arlington National Cemetery. It also will acquire for the cemetery about five acres of public land now owned by Arlington County. The County will negotiate with the Army to ensure that Arlington and its taxpayers receive fair compensation for the County-owned land as the Army pursues its acquisition.

For several years, Arlington, the Department of the Army and the Virginia Department of Transportation have looked for ways to realign the existing road network and complete various real estate transactions in order to maximize contiguous acreage for Arlington National Cemetery’s expansion, and to improve the transportation infrastructure in this important area of the County and the region.

As compensation, the Army had originally proposed, and Congress had authorized, a land exchange agreement that would have provided Arlington County with all land south of a realigned Columbia Pike to meet a variety of public facility needs. Due to the decision by the Army to retain all federal land in the area and to acquire existing state and local land not needed for the road network, Arlington County will not obtain any land at the site for future development.

In addition to realigning Columbia Pike as part of the cemetery’s expansion, the County plans improvements to the roadway that will help transform it into south Arlington’s “Main Street” and improve travel for those walking, biking, riding transit and driving in this gateway to the monumental corridor.

The realigned Columbia Pike would be rebuilt as a four-lane roadway with a sidewalk and a shared-used path, improved landscaping, enhanced lighting and undergrounding of utilities as part of the County’s Pike multimodal project. 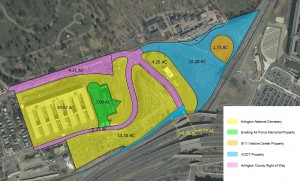 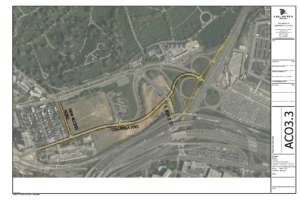