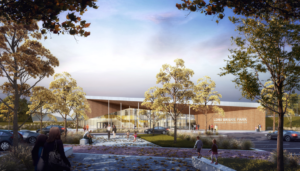 Long Bridge Park, formerly known as the North Tract Project, will be a new state of the art aquatics, health and fitness facility and park on the north end of Crystal City in Arlington. Its concept was approved in February 2004 by the Arlington County Board. Currently, plans and work are underway for a swimming and exercise venue set within a dynamic recreational complex that features four full-size athletic fields overlooking premier views of Washington D.C.

Given its size and scope, Long Bridge Park is intended to be implemented in multiple phases. The phasing is designed to manage the fiscal impact of a public investment of this magnitude. Much of the infrastructure, utility work, and environmental remediation were constructed in the first and second phases. Subsequent phases will add to the park’s features until the whole vision for the park is accomplished. Below is a detailed description of Long Bridge Park’s elements by phase.

Phase 1 of Long Bridge Park was completed in November 2011 and contains much of the infrastructure upon which the remainder of the park will be built. Environmental remediation of this portion of the site has been completed. Utilities to manage stormwater and provide on-site electricity, water and sewer service have been installed. Three full size, rectangular, lighted, synthetic grass athletic fields have been constructed. The first section of the Esplanade has been built, along with picnic groves, rain gardens, the overlook, walkways, and surface parking for 180 cars between fields #1 and #3. Phase 1 also includes two restroom facilities and a storage building that contains a staff office and vending services. Public art and an interpretive program have been integrated into the overall design. Long Bridge Drive is being renovated to become a two-lane road with on-street bike lanes, sidewalks, 175 on-street parking spaces, medians, and street trees. Significant utility relocations have been required during the renovation of Long Bridge Drive.

The Aquatics & Fitness Center will include the core programs that have been the mainstay of the planned aquatics facility and surrounding park improvements. These elements are a 50-meter pool, 1, 3, and 5 meter diving, family pool, and health & fitness spaces. This will mark the first time Arlington County will use the Design-Build approach for a new County facility. Design-Build is widely used by governments across the nation. In this approach, a competitive “design to budget process” establishes a budget at the outset of the project, which the contractor must not exceed. The project will also develop about 10.5 acres of additional park land.  The park will include the extension of the Esplanade, rain garden(s), public gathering areas, parking, and support facilities.

The budget for the total Phase 2 project design and construction, as approved by the County Board in the FY 2017-2026 CIP, is $54.7 million.  The budget includes, in addition to the aquatics facility, an extension of the esplanade, rain gardens, public gathering spaces, parking, public art and additional environmental remediation.

The County Board approved the award of the Long Bridge contract to Coakley & Williams Construction, Inc. in Nov. 2017.

This Phase was completed in July of 2016 and added children’s play areas at the south end of the park adjacent to 6th Street South. Imaginative play features and structures offer opportunities for creative play for children of various ages. Landscaping, lighting, seating, and fencing support the play areas.

Phase 3B will complete the outdoor park components of Long Bridge Park. A fourth full size, rectangular, lighted, synthetic grass athletic field will be constructed over the surface parking that was built in Phase 1. The current sloping sides of that lot will be cut back under the new field, expanding the lot to about 254 spaces. Lastly an elevated walkway will be extended from the overlook east across the adjacent railroad tracks to an observation platform to be built on County-owned property to the east of the tracks. The observation platform will have panoramic views of the Roaches Run Waterfowl Sanctuary and the Washington DC skyline and will provide opportunities for interpretation. The walkway and platform will be designed to harmonize with other park features and their surroundings. To protect sensitive plant and animal species in and along Roaches Run, the platform will be built in an environmentally sensitive manner and will not provide any public access to the ground.

Phase 4 will complete the Aquatics, Health & Fitness Facility by adding a large Multiple Activity Center (MAC) on the site of the Phase 2 surface parking lot. The heart of the MAC will be a large space that can accommodate indoor soccer, futsal, basketball, volleyball, tennis, and community events among other activities. Additional fitness space and group exercise rooms will be included. An elevated indoor walking/jogging trail will be constructed around the MAC. The Facility will also include racquetball and/or squash courts and a climbing wall. On the north end of the building, two meeting rooms with full views of the monumental skyline will be available for rental and events. Five hundred and forty seven (547) parking spaces for the Facility will be provided in an underground structure below the new addition. The Esplanade will be completed to its most northern reach and access to it will be extended around the indoor facility.

Full realization of the updated Master Plan also involves transportation improvements that are not included in the above phases because they are not within the boundaries of the park or the County’s control, but depend on planning, design and funding decisions by other parties such as VDOT, the National Park Service, the Federal Highway Administration, and CSX.