On February 2, 1959, four African American seventh-graders entered Stratford Junior High School, marking the beginning of the end of the Commonwealth of Virginia’s practice of public school segregation. They were the first African American students in Arlington County to attend their neighborhood school rather than a segregated school.

On Tuesday, Feb. 2, 2016, three of the four of the original integrating students returned to the Stratford Building, now home to the H-B Woodlawn Secondary Program. Fifty-seven years ago on that day, they had to negotiate a battalion of helmeted police officers protecting the perimeter of the school grounds. This time, they were honored participants in a special evening, “Celebrating Arlington’s History Makers.”

The former students — Michael Jones, Lance Newman and Ronald Deskins — joined a distinguished panel of community members in Stratford Auditorium, where the public joined the County in honoring them and the community effort that helped bring about integration. The other panelists included:

Learn more about the event by watching this video of APS’s student event with the panelists. See photographer Greg Embree’s full gallery here. 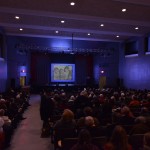 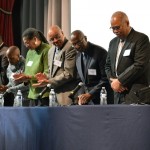 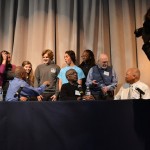 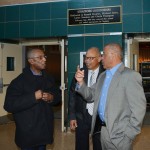 Michael Jones, Deskins, and Newman outside the Stratford Auditorium that has been dedicated in their honor. Photo by Greg Embree 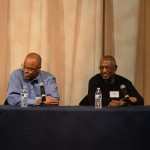 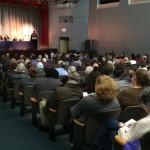 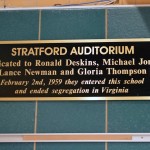 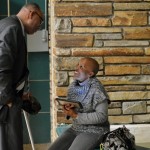 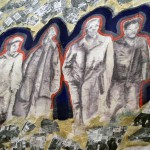 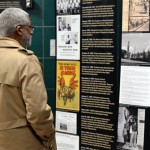 Interpretive banners on display in the Auditorium lobby. Photo by Blake Tippens 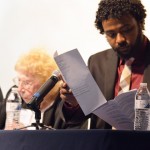 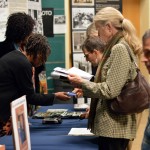 Audience members had the opportunity to view copies of the books written by Miller and Taylor. Photo by Blake Tippens 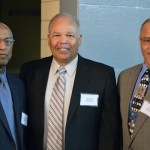 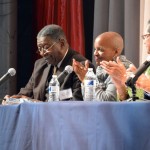 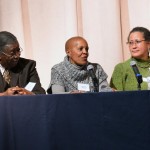 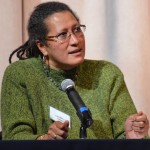 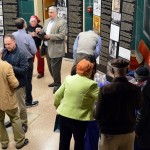 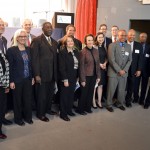 The panelists with Arlington County Board and the County Manager. Photo by Blake Tippens 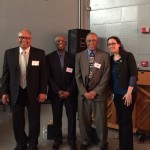 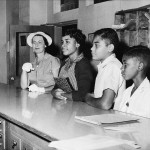 A.J.E. Davis, left, accompanies students Joyce Bailey, George Nelson and Leslie Hamm Jr., left to right, as they wait in the school office to see the principal of Stratford Jr. High School in Arlington, Va., Sept. 5, 1957. The principal, Claude Richmond, refused admission of the black students today as the fall term begins and told them they would have to attend Hoffman Boston School for Negroes where they had been assigned. (AP Photo) 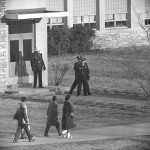 Three police officers stand at the entrance to Stratford Jr. High School as the four black students enrolled in the previously all-white school arrive for classes in Arlington, Va., on Feb. 2, 1959. One of the officers records the scene with a movie camera. Approaching the entrance are, left to right, Lance Newman, 13, Ronald Deskins, 12, Michael Jones, 12, and Gloria Thompson, 12. (AP Photo) 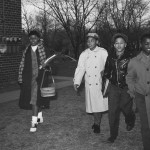 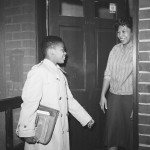 Ronald Deskins, 12, exchanges smiles with his mother, Mrs. Carroll A. Deskins, as he leaves his home in Arlington, Va., on Feb. 2, 1959 to be one of the first African-American children to attend classes in a formerly all-white Virginia public school Stratford Junior High. He joined three other African-American children in entering the rear of the heavily guarded school without disturbance. (AP Photo) 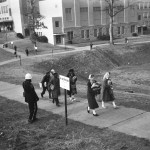 African American and white children walk past a policeman as they leave Stratford Junior High School in Arlington, Virginia Feb. 2, 1959, after the first day in integrate classes in Virginia. (AP Photo) 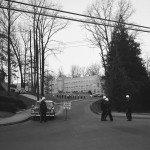 A heavy detail of police guards Stratford Junior High School in Arlington, Virginia Feb. 2, 1959. The Police were ready for a riot but wound up with almost nothing to do as Stratford became Virginia’s first racially mixed school. This view is at the rear of the big school before the start of classes. Row of police at center are walking to their assigned positions around the building. (AP Photo/JR) 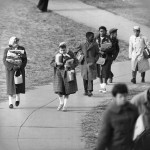 Four African-American children leave Stratford Junior High School in Arlington, Virginia on Feb. 2, 1959, after their first day at the previously all-white school. The African-American children, from left, are: Michael Jones, Gloria Thompson, Lance Newman and Ronald Deskins. They walked to the border of the school grounds where an auto waited for them. (AP Photo/Byron Rollins)

To receive periodic Historic Preservation updates in your inbox, sign up here: