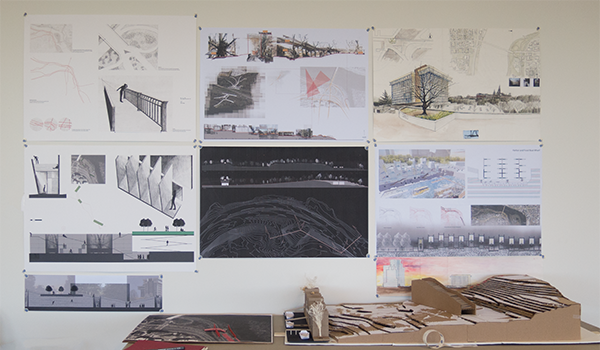 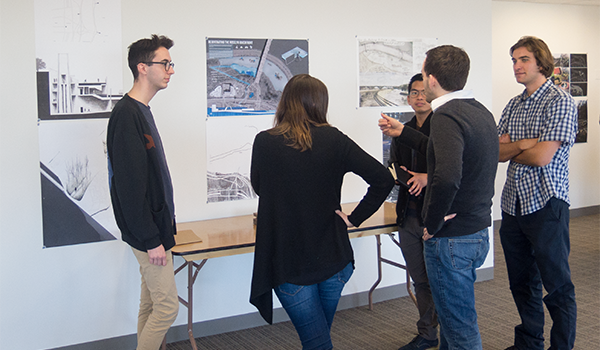 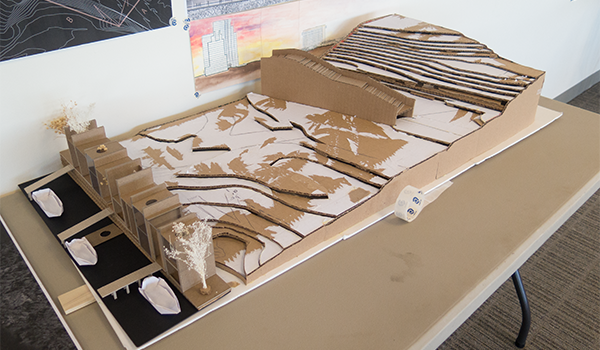 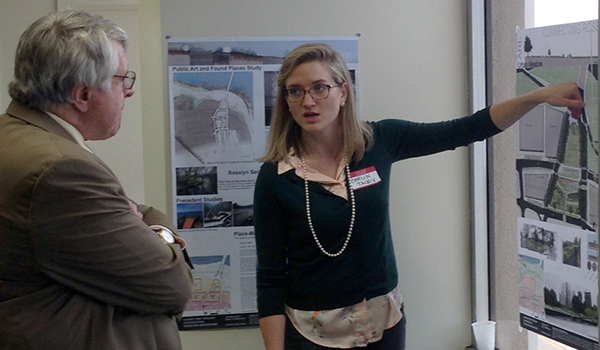 Students at the Virginia Tech Washington-Alexandria Architecture Center were asked to envision what could be done with a new, accessible Rosslyn waterfront. Three programs were developed for students to choose from, each including both a means for arriving and an activity at the site:

For more information, check out the following news articles as well as each student’s submission:

Ian proposed a new causeway for the parkway that encloses a lagoon and allows for more intimate contact with the water. A small stream runs down a narrow ravine and flows into the lagoon, with a protected beach where children can wade in the water and kayakers can launch their boats.

Paige proposed moving the parkway farther inland, cutting into the slope with a large retaining wall that supports a new traffic circle for access to the Key Bridge.
Design Board | Analysis Board

Lauren studied the theatricality of the existing parkway and proposed an elevated stretch, setting up a dramatic view of the Potomac River and Key Bridge. A series of terraces with cascading pools step down to the river’s edge, with numerous opportunities for recreation.
Design Board

Carlin was inspired by the existing contrast between wild vegetation and the constructed landscape. She proposed a wilder woodland in the parkway medians and developed spaces that would lead people to the waterfront.
Design Board

Will Scott – Showering Under the Parkway

Will relocated the parkway slightly inland, sitting higher on the slope and allowing room for a bathing facility for bicycle commuters. Cyclists would make their way through an ascending set of courtyards to reach the heart of Rosslyn.
Design Board

Runyu proposed constructing a pair of long, thin bridges over the parkway as a continuous pedestrian route linking the Rosslyn commercial district to the river.
Design Board

Charlston Britton – Bridging the Gap – A Boathouse for Rosslyn

Charlston sought to explore and provide a connection between the perceived boundaries of the Rosslyn business district and the Rosslyn waterfront.
Design Board

Richard exposed and reassigned sediment paths for access to the Potomac River waterfront. Existing path language is replicated for cohesion with George Washington Parkway elements.
Design Board #1 | Design Board #2

This project is designed as a place of seclusion in the midst of the Rosslyn Business Improvement District. The existing GW Parkway is pushed into the Potomac to create a secluded water channel and clear land for development.
Design Board

Jan envisioned a park that connects the city with the river. The park is designed to combine different uses; restaurants, a bike club, ephemeral shops and others.
Design Board #1 | Design Board #2 | Analysis Board | Renderings

This project celebrates the area’s rich topography as a means of guiding people through the movement of water from Rosslyn’s dense urban core to its burgeoning riverfront.
Design Board | Analysis Board

Manting tried to find a solution to the broken connection of the Rosslyn business area and the waterfront, also a National Park. A new boutique hotel will be built for performers, the audience and other travelers.
Design Board

Using harvested stormwater, an urban spring emerges from a wall in a depressed plaza in the center of a traffic island. An urban stream leads people down to the river through a pedestrian tunnel, a plaza and wetlands.
Design Board | Analysis Board | Grading Plan

Suzie’s project featured improvements to Gateway Park. She sees it as a stop for people biking, a communal space with a pool and a personal bathing experience.
Design Board

Tamanna aimed to gain an understanding of the physical urban fabric by following the roadway network. The result is a linear transect through the city of Rosslyn that choreographs varied interactions between people and water.
Analysis Board

Sebastian’s project is situated in the coastal side of the Mount Vernon Trail facing the Arlington riverside. The goal is to encourage users of the trail to use the project as a station in their commute or exercise regimen throughout the year.
Design Board

Design Board | Research Board