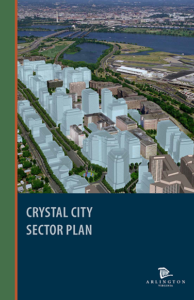 The Crystal City Sector Plan lays out the community’s vision to transform Crystal City into a more inviting, lively and walkable community with more ground floor retail, better quality office space and more housing options. This 40-year plan won the American Planning Association’s 2013 National Planning Achievement Award for Innovation in Economic Planning and Development. It pioneers the use of economic analysis for planning purposes and is among the first of its kind to closely study the economics of demolishing and replacing major commercial buildings.

The Plan was adopted in 2010, following an extensive community-based planning effort that included more than 90 public meetings over a four-year period. It seeks to encourage new development by providing density and other incentives, improving streets, sidewalks and other public infrastructure, upgrading open space and increasing transit options.

The Plan outlines seven key goals for the revitalization of Crystal City:

Some of the improvements planned include:

Over the life of the plan, the Crystal City area is expected to see the construction of 9.7 million square feet of new office space (5.3 million net), 7,600 net new housing units, and 1.5 million square feet of new retail space (650,000 net), accommodating a net increase in density of 61 percent – in what is already the highest density neighborhood in the region. This will result in 20,000 net new jobs and 14,000 net new residents. In the coming twenty years, the plan and nearby areas are projected to see private investment of $3.5 billion, public investment of $200 million, and increased property tax collections of $800 million.